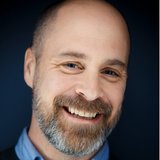 Data scientist by day, IoT maker by night and one of GOTO’s highest-rated speakers

Mark is a Brexit refugee living in Oslo. Previously a Java developer, he now leads a team of data scientists at Bouvet, a Norwegian IT Consultancy. He learns something new every single day.

He is also an active maker and IoT hobbyist where he likes to apply new technologies to real world problems. In what is left of his spare time, Mark leads the Norwegian JUG (javaBin), where he helps organize community events such as JavaZone.